Just as the name suggests the Steep Wedge House in County Cork is no ordinary self-build home. It is an impressive example for self-builders and the construction industry to realise what is possible when innovative design is embraced.

The show-stopping 1,900 sq ft house located in the Cork city suburb of Douglas is striking in appearance but it was built on a tight budget inspired by the sloping nature of the plot it was erected upon. Gareth Sullivan, who is principal architect at Simply Architecture, designed and project managed the family property.

Once an old builder’s yard, it had become a disused piece of wasteland. The site was tricky. Not only was it on a steep sloping piece of land next to a busy motorway; it had three wayleaves – protected access routes to county council services pipes – running across it.

But this didn’t faze the couple who approached the owner and began research with the council. They bought the site in 2013, desperate to unlock its potential. It had already suffered several failed planning applications for a one-off house. 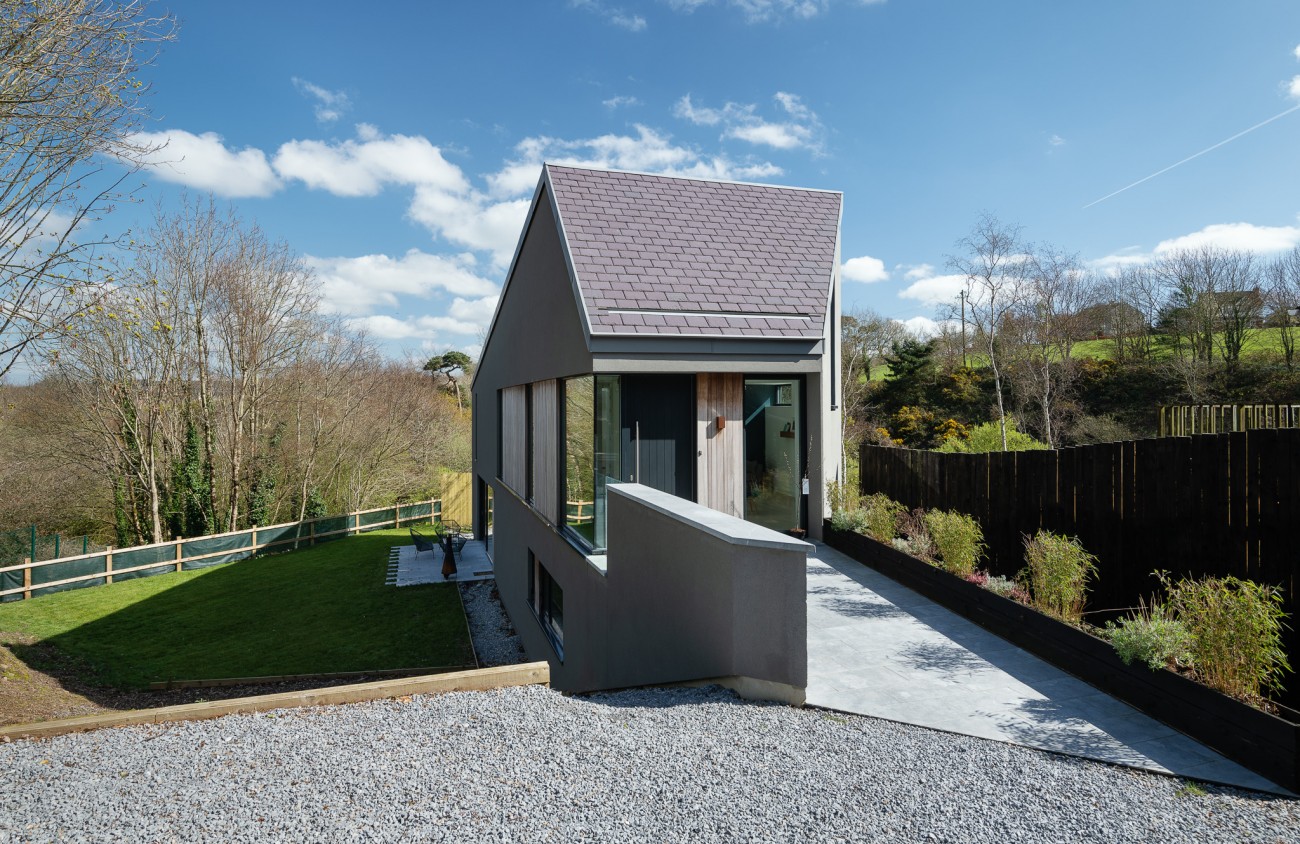 Gareth explains: “Many properties we saw were simply out of our price range and in a way I was looking for that ‘problem’ site that no one wanted to buy. We found it but believe me it wasn’t pleasant to look at. It was basically a dumping ground and an unconventional shape. I knew how risky the project was but our ambition was to remain in the area and we decided to take that plunge.”

Instead of running for the hills, Gareth’s architectural background helped in finding a solution to this seemingly impossible site. “I could see the potential and it was situated close to a lovely cul-de-sac in a desirable neighbourhood with pretty surroundings. This site may not have been pleasing to the eye but I had the confidence to take it on,” he adds.

Gareth and Barbara began a long process with Cork county council and the local planner. Planning took 18 months and by 2015 the couple had finally received sign-off. Barbara fell pregnant in 2016 and “life took over” but they broke ground in August 2016. However, it proved a huge undertaking for Gareth to keep things on track while working full-time and living close to the site. He did some of the labouring in his spare time from clearing the site, fitting plasterboard and insulation to helping with groundworks.

In the absence of a main contractor - a costly endeavour for the couple - they decided to project manage the build by employing multiple tradespeople. This also resulted in the decision to use a timber frame construction. This method allowed the windows to be ordered as the timber frame system was being fabricated, ensuring the whole house was weather tight within two weeks of erecting the timber frame. The cement board cladding was also very quick and helped to ensure overheads like scaffolding were only needed for a minimal time period. The entire construction took 13 months.

Gareth says: “I had a lot of experience working on construction sites before I became an architect and being an architect had its advantages but it’s so different when it’s your own self-build. I had to make all of the decisions so managing and co-ordinating various tradespeople was very difficult at times. But equally, the unusual nature of this project helped to get people on board.”

The success of the project came down to careful consideration of the restricted space available on the site once all the wayleaves were observed. This left a very small wedge-shaped footprint in the corner of the site. To fit a family home on the site every bit of available space outside the wayleaves had to be developed. Given the unusual shape and the steep slope, aesthetics, orientation and access all became issues that needed to be carefully considered.

To add to their already complex planning obstacles, the county council put restrictions on the ridge height and south-facing windows to prevent the property from overlooking a neighbouring site, severely limiting the house’s solar gain.

This property may have been built on a tight budget but Gareth’s vision was to ensure that the building fabric would be designed to exemplary airtight levels achieving passive house standards – an answer to some of the problems they faced due to the unusual shape of plot. An EPS (expanded polystyrene) insulated raft foundation with a timber frame structure proved the most efficient construction method, explains Gareth.

“The timber frame is a certified passive house system and thermal-bridge free detailing was employed throughout,” he says.  “In choosing materials such as cement board cladding and cellulose insulation we also ensured the house has used 77% less embodied CO2 than if the same design had been built in standard cavity wall construction.” 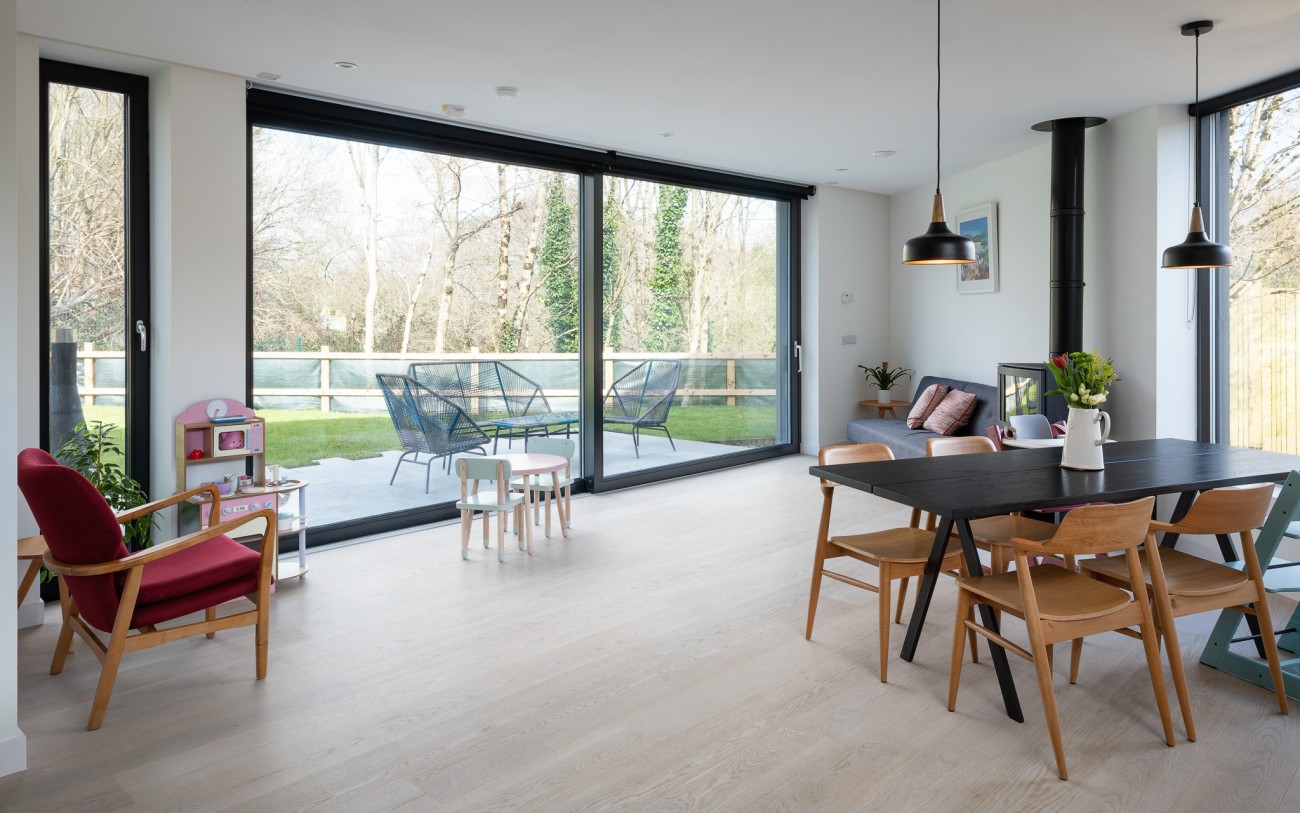 But achieving solar gain was not easy and this was overcome by employing the Passive House Planning Package – a design tool produced by the Passivhaus Institute to ensure the building fabric would be of a higher standard. Windows on the south-facing side were set high enough to avoid any problems of overlooking other homes. Additional roof lights also helped, and the living spaces are separated over three levels to track the sun’s path.

Despite the restrictions and the narrow shape of the house, Gareth’s innovative and thoughtful approach meant that challenges could be met with some rewarding solutions. He explains: “We wanted the house to look brighter and bigger than it actually is so, for example, we opted for frameless glass by our front door, which meant using structural steel to cantilever the corner so we didn’t need to put a post there – this gives us an extra 300mm and the illusion of more space.”

The use of high performing materials was a must on this project and Gareth praises Saint-Gobain Weber’s lightweight multi-coat render, which was used on the exterior of the property. The weberend MT multi-coat system is designed to rapidly finish buildings of frame and panel construction and was hand applied to achieve uniform colour and texture using the colour Welsh Slate for this contemporary and attractive home.

He says: “Achieving the Passive House standard meant investing in high quality materials and this is why we selected the products we did. Installing an MVHR (Mechanical Ventilation and Heat Recovery) system added to this – to us it was essential.” 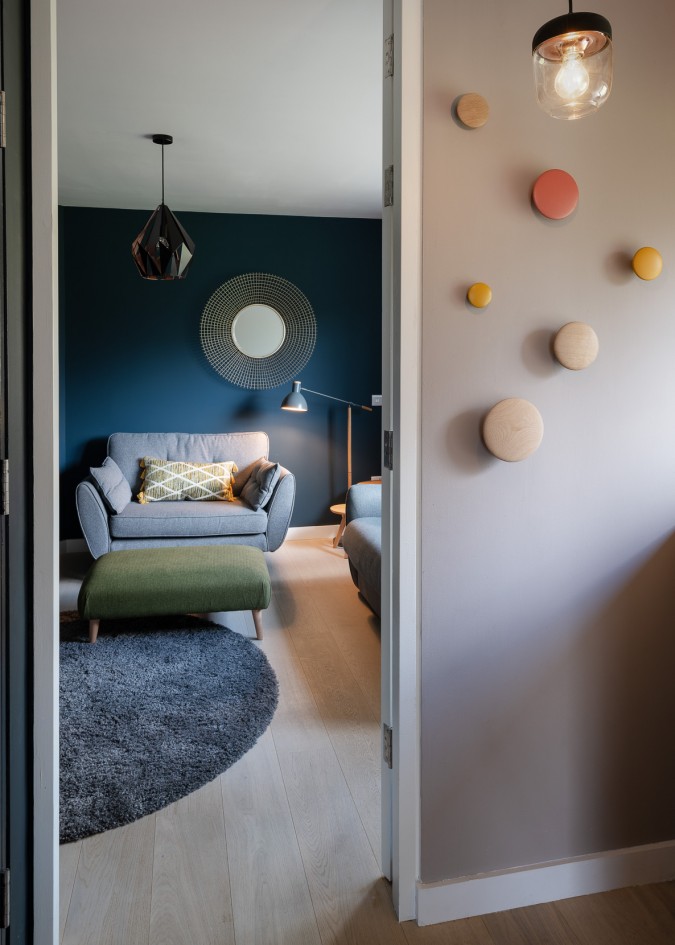 The thoughtful attention to detail and the risky ambitions of this couple who dared to think outside the box has resulted in a stunning light and airy three-bedroom home spread across three floors. The use of natural materials with strong green credentials pervades the build from the roof with the Penrhyn Bangor Blue slates to the Iroko timber cladding. It meets all their requirements and provides a flexible living space for the couple and their two young daughters. Inside, the simplicity of interior design carefully matches the use of natural materials on the exterior. “We wanted a simple palette of colour with a pop of colour here and there. I love our white oak flooring,” adds Gareth.

The majority of their time is spent in the kitchen and the two “snug rooms” as Gareth calls them. During the Coronavirus lockdown, he worked from home in the first floor living room and really enjoyed the light and quietness the room provided – something he admits he hadn’t appreciated as much. 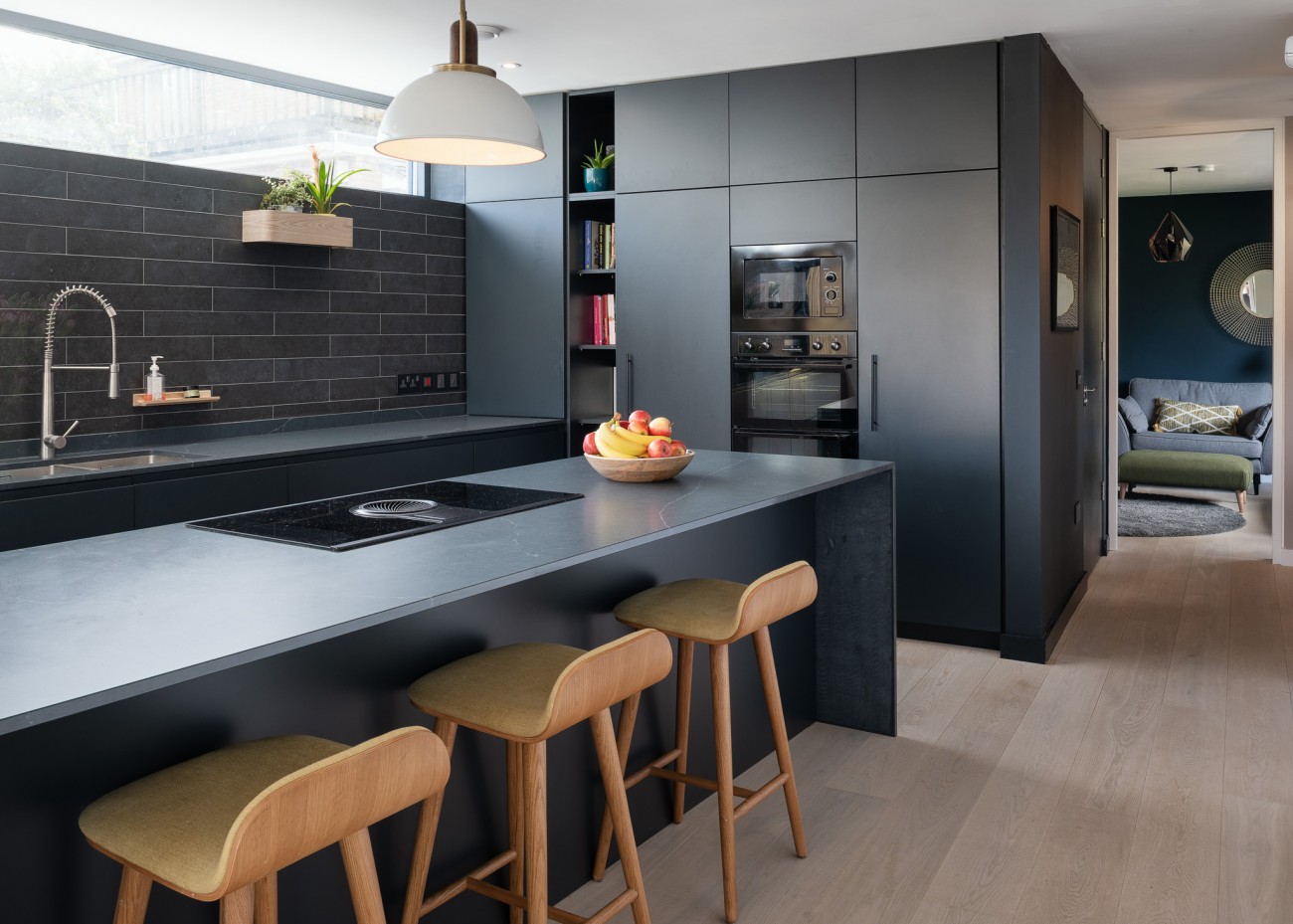 “Our guest bedroom is close to our living spaces and that is used mainly as a playroom but can be easily converted when guests come to stay. It was important to us that we weren’t wasting space but using it in the best way possible,” he says.

The project, like any self-build, wasn’t always plain sailing admits Gareth. “The financial aspect of the build was stressful at times and I’ll never forget when we started doing the groundworks and we discovered a manhole. I remember going home and not being able to say anything to Barbara. I was so worried; we just didn’t know what we’d find. It could have been game over but I met the council the next day to discover it was a redundant manhole.”

But the highs of this build ultimately outweigh any negatives. The Steep Wedge House has received positive feedback in the local community who were delighted to see the reinvigoration of a disused piece of wasteland. But it was scooping several accolades for their commitment to energy efficiency and its use of low embodied energy materials, which came as a real surprise to the modest couple. 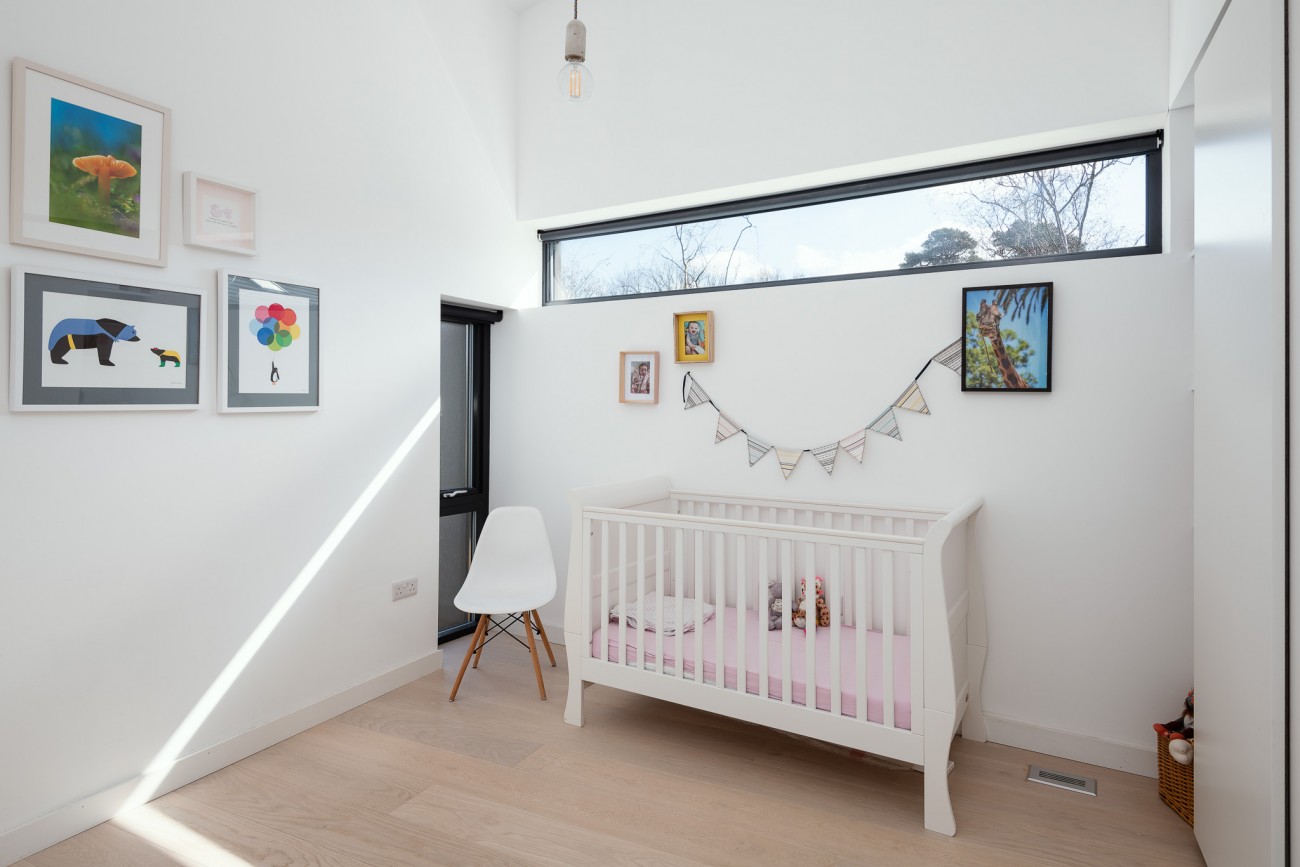 The project was named a finalist in the Residential category in the 2019 Irish Construction Excellence Awards. The house was also named the winner of the 2019 Overall Isover Award as well as Designer of the Year 2019.

Gareth says: “To win so many awards was amazing and after a few years of living here we are enjoying our home more than ever. It’s hard to see the bigger picture and it’s easy to get bogged down as a self-builder. After a few months of trying to complete the build there were still finishes and fixes but I’d say that the house is consistently comfortable and I am so pleased with the cement board and render system we used in the build to achieve our end goals. I also just love the roof slate and the stairs and flooring inside.”

“Building a home like this can make real savings in the way you heat your home but the comfort levels are incomparable. Yes, our house has less than a quarter of the upfront carbon costs it would have had if we’d built to the same standard using a typical cavity-wall method. Having an energy efficient home is a real bonus but seeing our girls enjoying the space has been the real winner.” 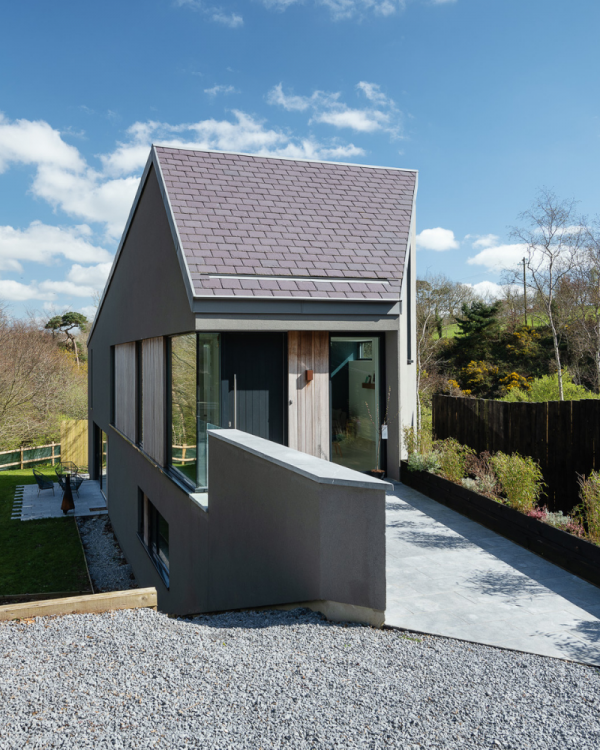 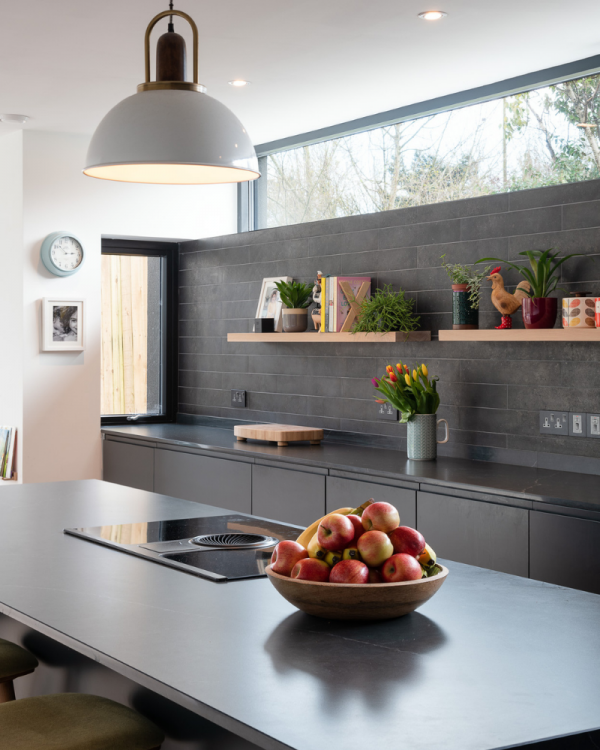 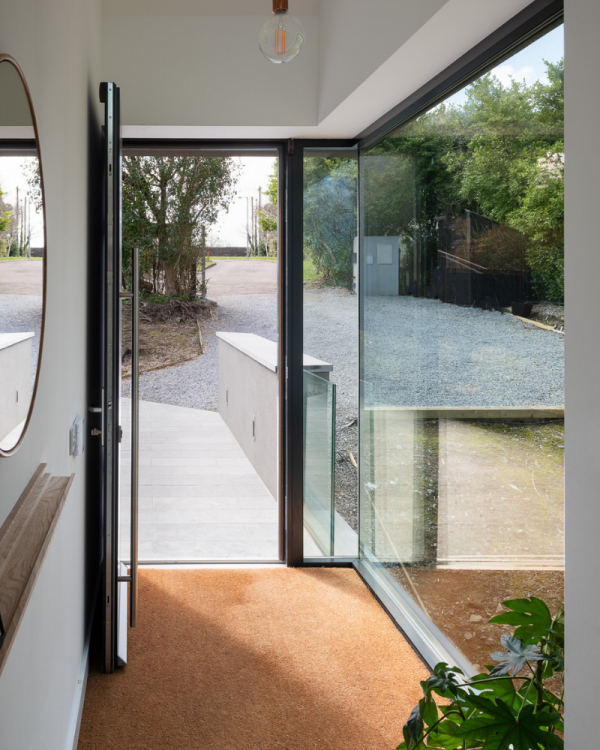 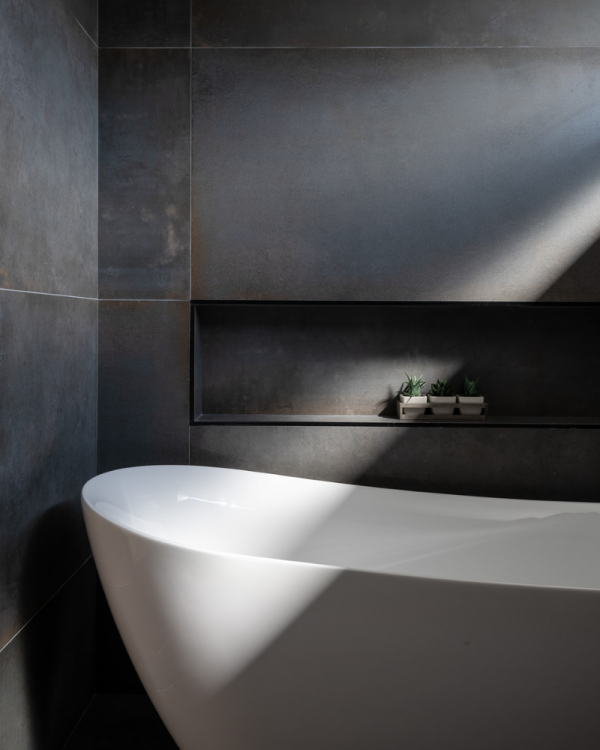 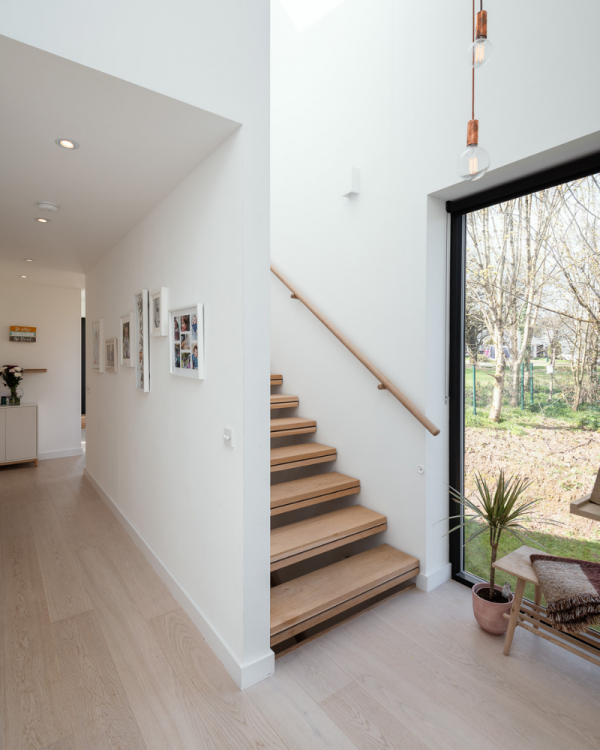 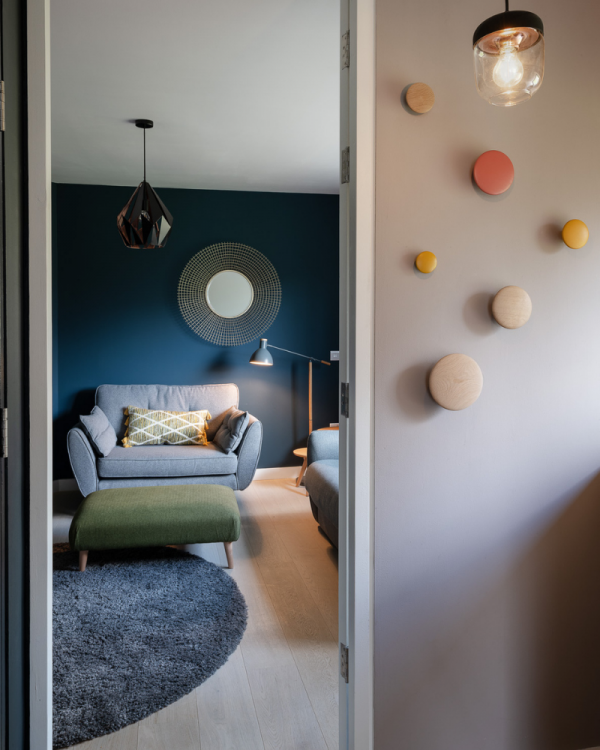 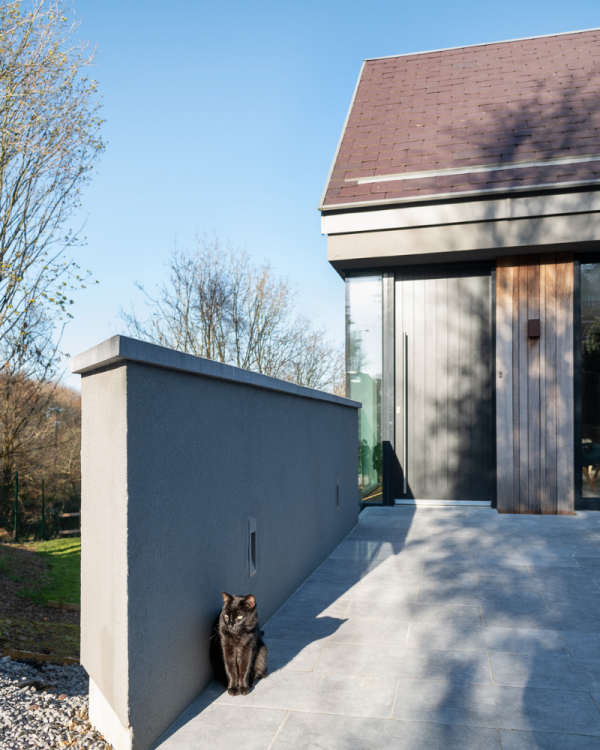 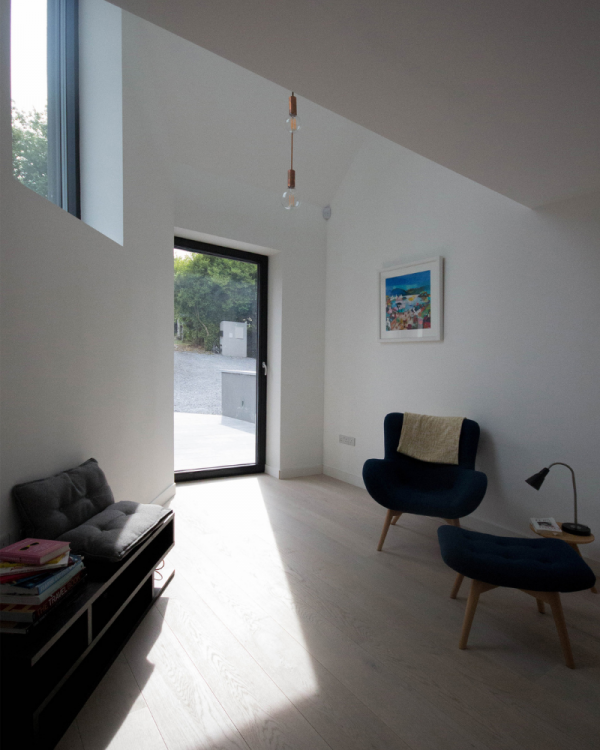 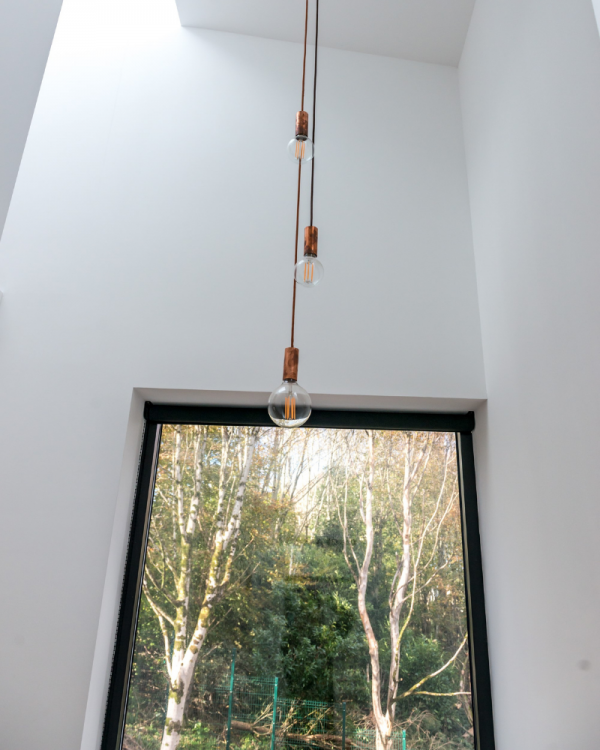 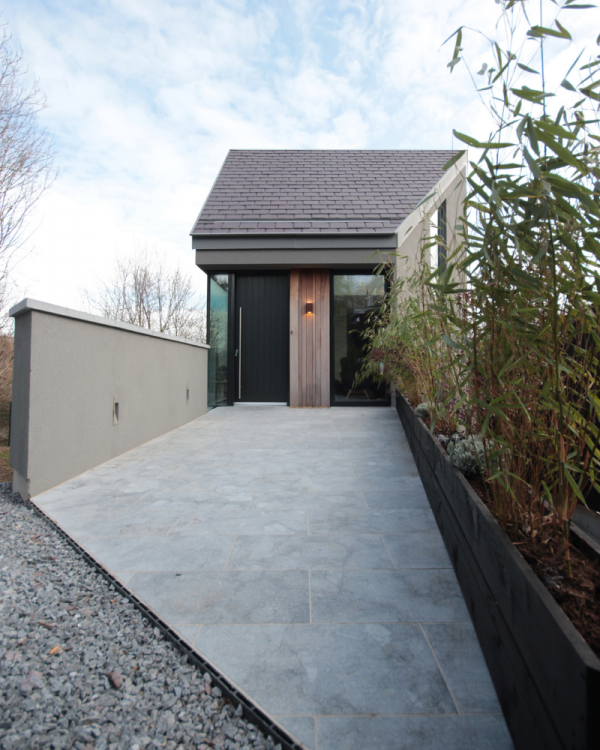 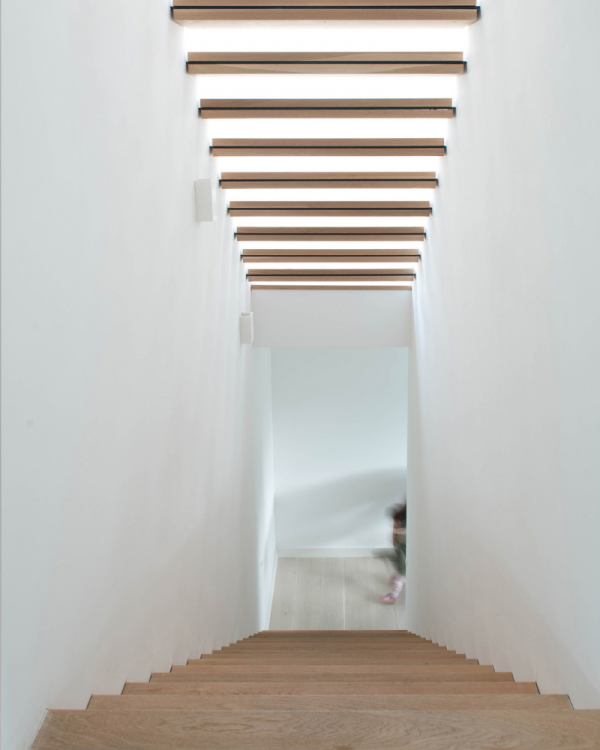 Discover how to make the most of your plot to get the best performing building, five ways to make your self-build more energy efficient, and the importance of ventilation in your self-build in our blogs.

Find more self-build inspiration in our case studies, like this Passivhaus home in Gloucestershire. 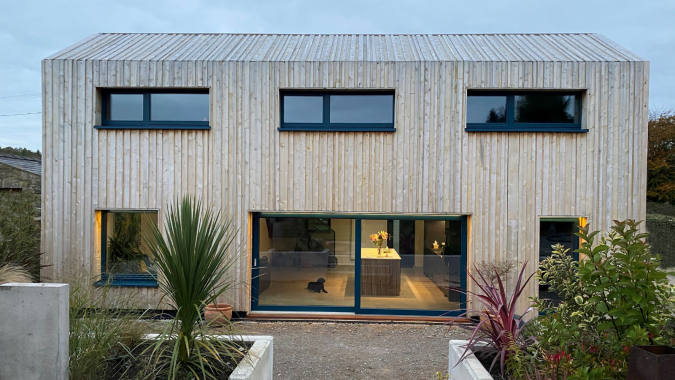