“It needed a lot of work but we could see its potential,” says Ian Jones of the 150-year cottage he bought as a doer-upper in September 2015.

With his 25 years’ experience in carpentry and construction Ian felt the renovation project to transform the old cottage into a warm and comfortable family home would be straightforward but these plans crumbled, as did the walls of their building.

“It was tough when we came to the realisation that actually this single-glazed cottage needed a lot more work than we envisaged,” explained Ian. “We started living in the house and we uncovered lots of damp and black mould in places, walls were crumbling and it was cold. The children became unwell. It was a no-brainer, we had to resort to plan B – self-building our family home. We had to knock it down and start again.”

The couple remained steadfast in their plan to pull down the cottage. For them, remaining in the picturesque village of Ellwood in the Forest of Dean, was their dream – a place where they had grown up and their young children Frankie and Drew were already settled in the village nursery.

“We fought our case hard and it wasn’t easy. Friends of ours, who happen to be heritage consultants, helped us along the way,” adds Ian.

Finally, the battle paid off and after waiting a painstakingly long 18 months, planning permission was finally granted and work commenced in 2017.

But gaining planning permission to demolish the old cottage down was not well received.

“It became a complete nightmare. The local council wouldn’t allow us to knock the building down – this was the last local cottage of its kind in an area of local distinction,” says Ian. 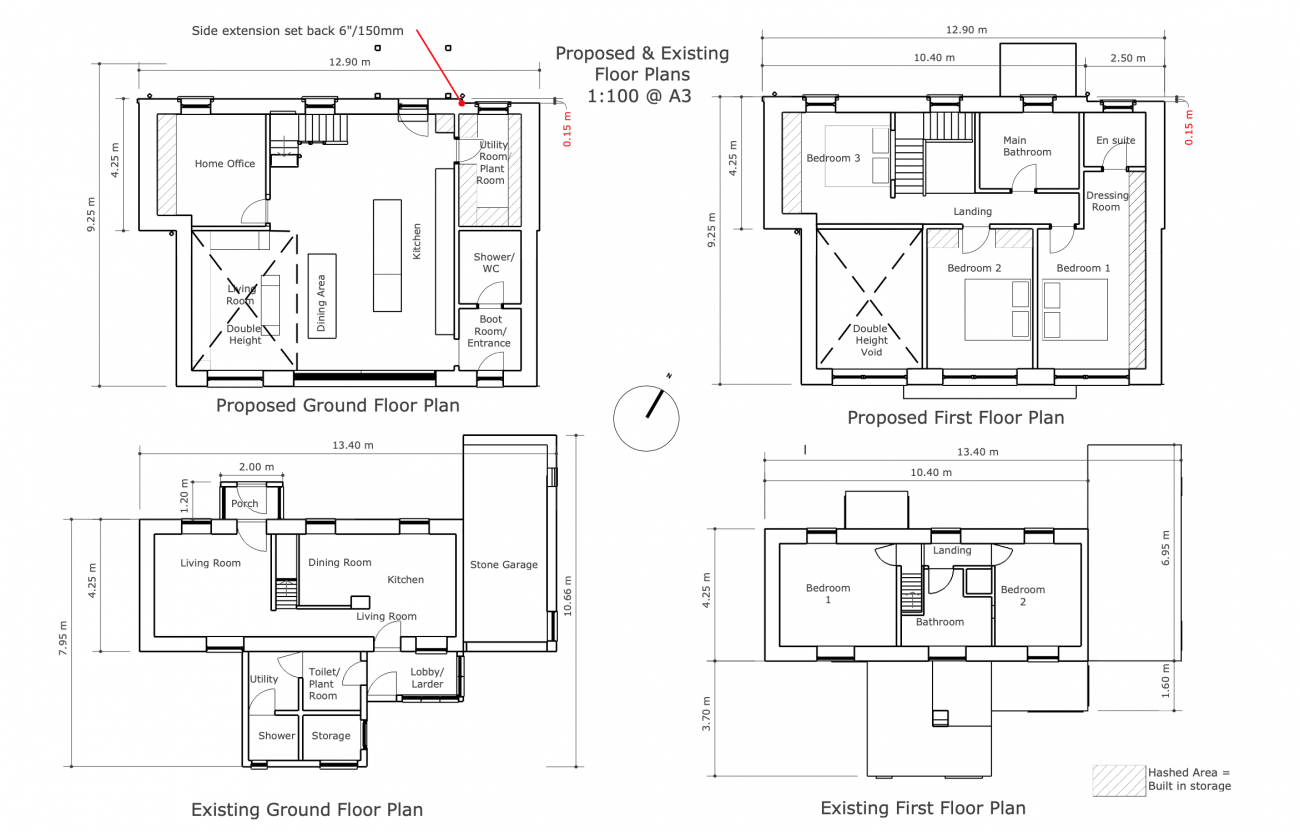 As they nervously waited for the planning permission to arrive, the couple began to explore the idea of a timber-frame Passivhaus self-build. In reality, Ian didn’t have much experience of Passivhaus but after discussions with his brother-in-law Scott, who was looking to set up his own Passivhaus consultancy firm, Ian grew excited at the prospect of a sustainable home.

“The idea of living in a comfortable, warm home with an even temperature throughout the house seemed like the ultimate to us, especially after experiencing the old cottage!” 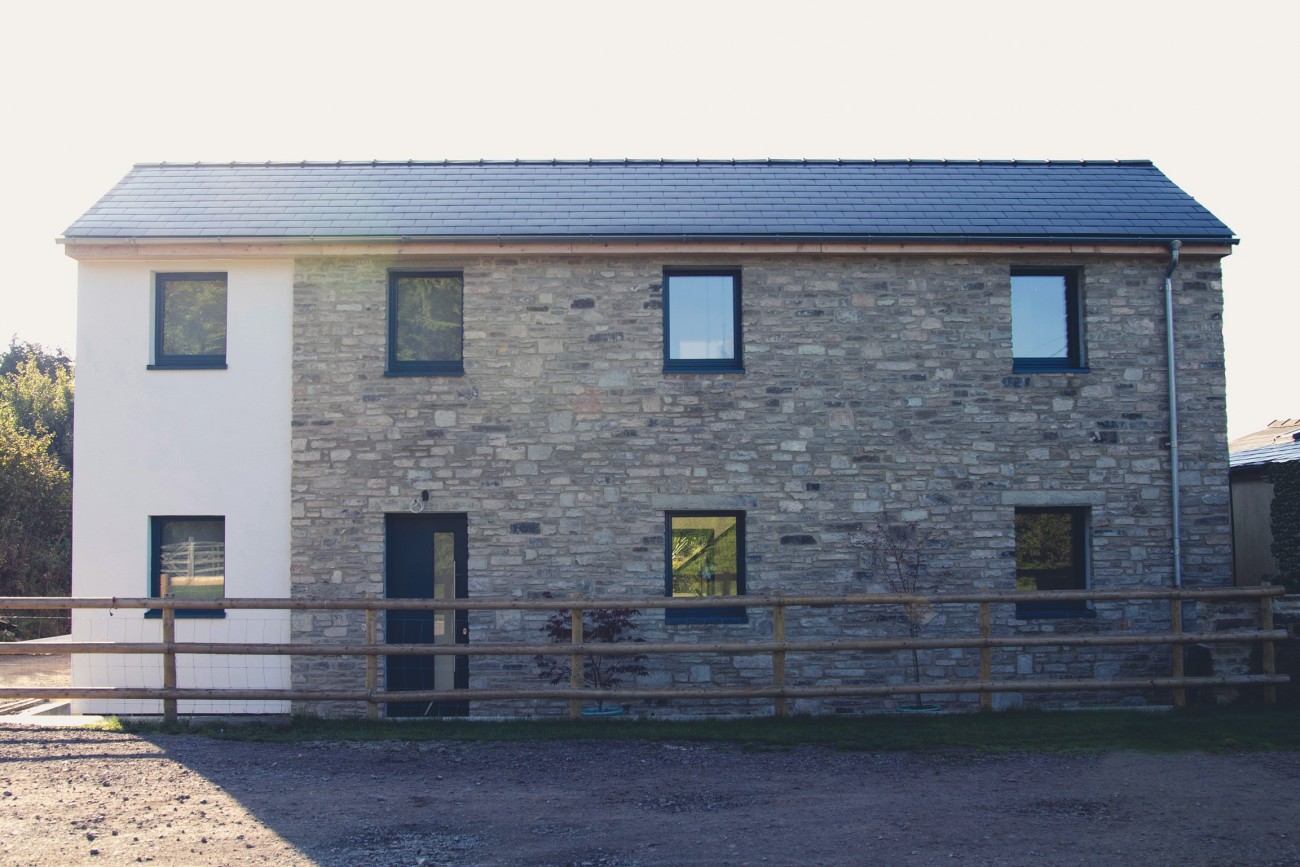 The Passivhaus Standard is described by the Passivhaus Trust as a “building which provides a high level of occupant comfort while using very little energy for heating and cooling.”

This concept appealed to the family and they considered it to be an achievable project.

Living in a caravan on a self-build plot was never the intention of these first-time self-builders. “But we soon decided that this project would be a sustainable self-build and the only way to achieve this was to knock the whole cottage down and start over again,” explained Ian.

“Our requirements were simple, Ian explains, “we wanted three bedrooms, an office and an open plan kitchen/living space. We felt so drawn to this kind of energy efficient self-build for its many benefits – the air quality, the low running costs and the comfort levels was a major factor. Knowing that our environmental impact could be reduced also played a huge part in our final decision.”

The couple decided on a rectangular-shaped house – chosen to follow an energy efficient building rule that the area of the building envelope should be as simple and small as possible.

By spring 2017 the old cottage was demolished which took up the couple’s evenings and weekends. As part of the planning stipulations the couple had to save all of the stone from the old cottage for use in their new build to retain some of the traditional styles used in the local area. It complimented the sustainable aspect which every part of the build replied upon.

By the time they reached summer, they began breaking ground. The timber frame was built by Ian and his brother-in-law Scott in just two months using “2x”2 i-joists, Vapourblock MDF board for air tightness internally and recycled newspaper cellulose insulation was inserted into the timber-framed walls and roof making it comfortable in the warm summers and cold winters.

“The wait to get started was hard because we had already moved to the caravan and spent our days staring out at the site,” admits Ian.

“But once the timber frame was erected, it was fantastic to take a look at the end of every day and see this building unfold in front of us.” 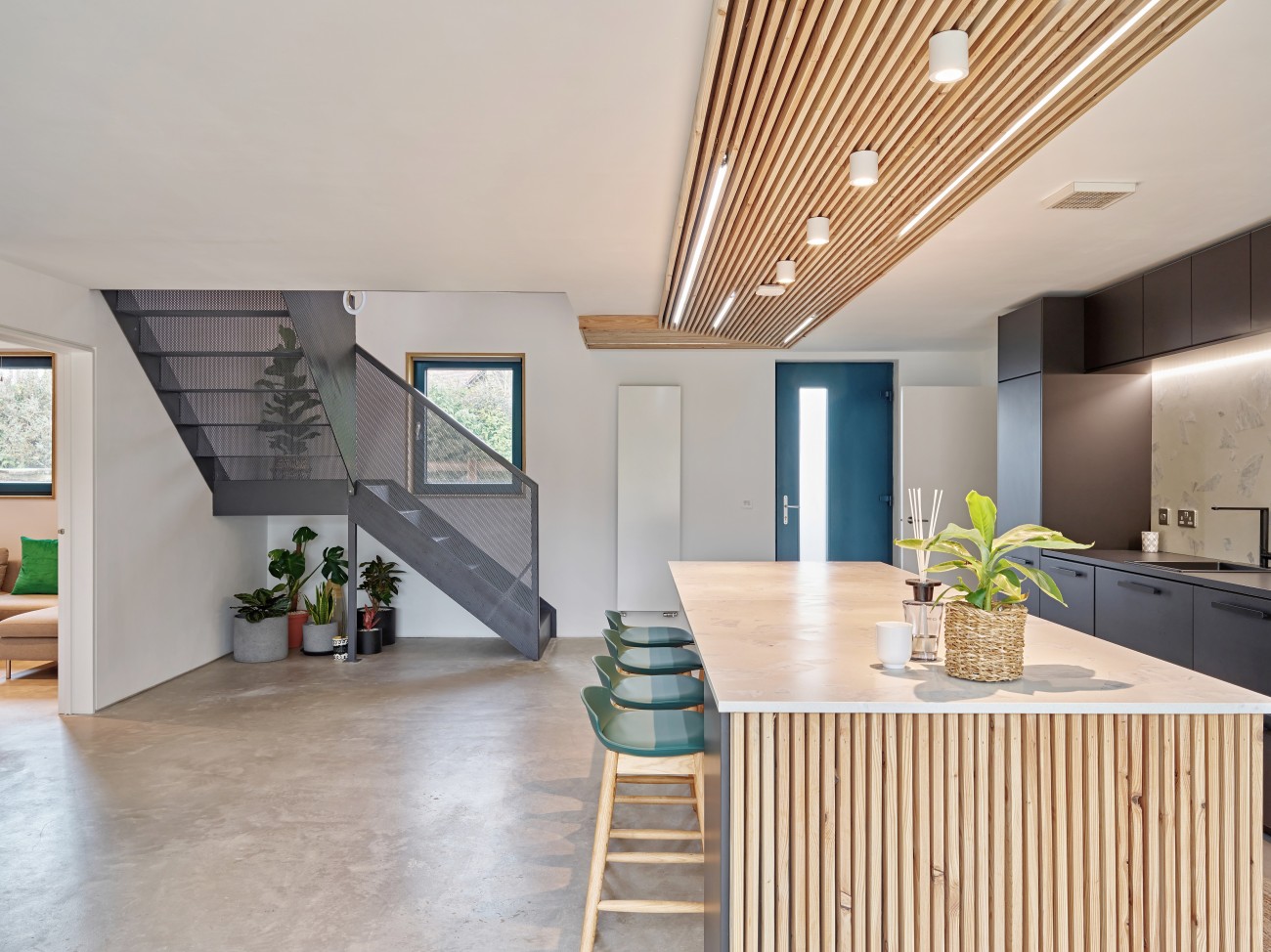 Justine tackled the painting, labouring and plastering but the biggest challenge, and one of their favourite features, are the red cedar boards which clad the rear of the property, running vertically up and over the roof. These took more than four months to cut, plane, sand, seal and fit each board by hand. The trees were felled in local woodland with the help of Ian’s dad Trevor who owns a sawmill. EPDM rubber was used on the flat roof – an environmentally friendly choice which offers longevity and is easy to install. The couple also installed solar thermal panels, adding that this is “a good investment to have free hot water”. Their plan is to add photovoltaics at a later stage.

Fruits of their labour

For the couple it’s been what they call “an education”.

“We’ve spent a lot of time educating ourselves, we went into this project knowing very little and at the end of it all I feel we’ve gained a huge amount of knowledge and insight into Passivhaus standard,” says Ian.

“In fact, we’ve found the project snowballed – people were fascinated by the ethos behind our build and wanted to know more about it – it’s the first of its kind in our district. Educating others about the benefits has been incredible. Our Passivhaus consultant Scott was extremely knowledgeable and spent a lot of time supporting us with budgeting and making us understand the costs along the way.

“The house design is perfect for us. Even though it is a new build we had to make compromises for planning purposes.” 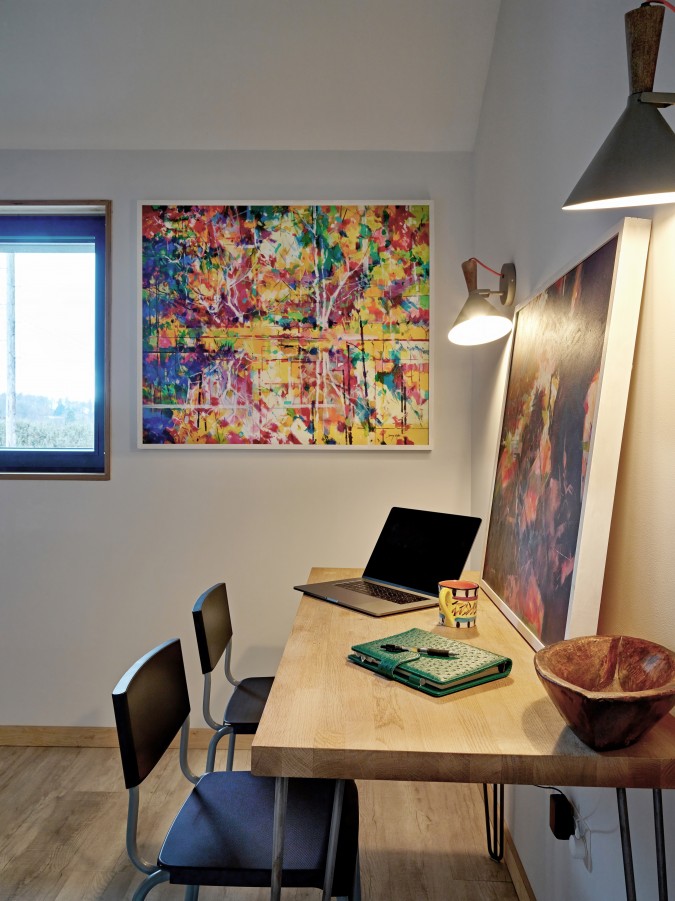 The simplicity of the external building is echoed inside with a contemporary and stylish finish.

The two-storey building can be entered through the simple yet functional boot room, which features custom-built furniture to neatly store coats and shoes out of sight and it is accessed from the rear garden/drive. A fully glazed door allows ample light in, allowing views of the garden. It was initially designed to be smaller but the couple later agreed that more room could be taken from the now compact downstairs toilet/shower room to allow the nature-loving family to remove their muddy boots. 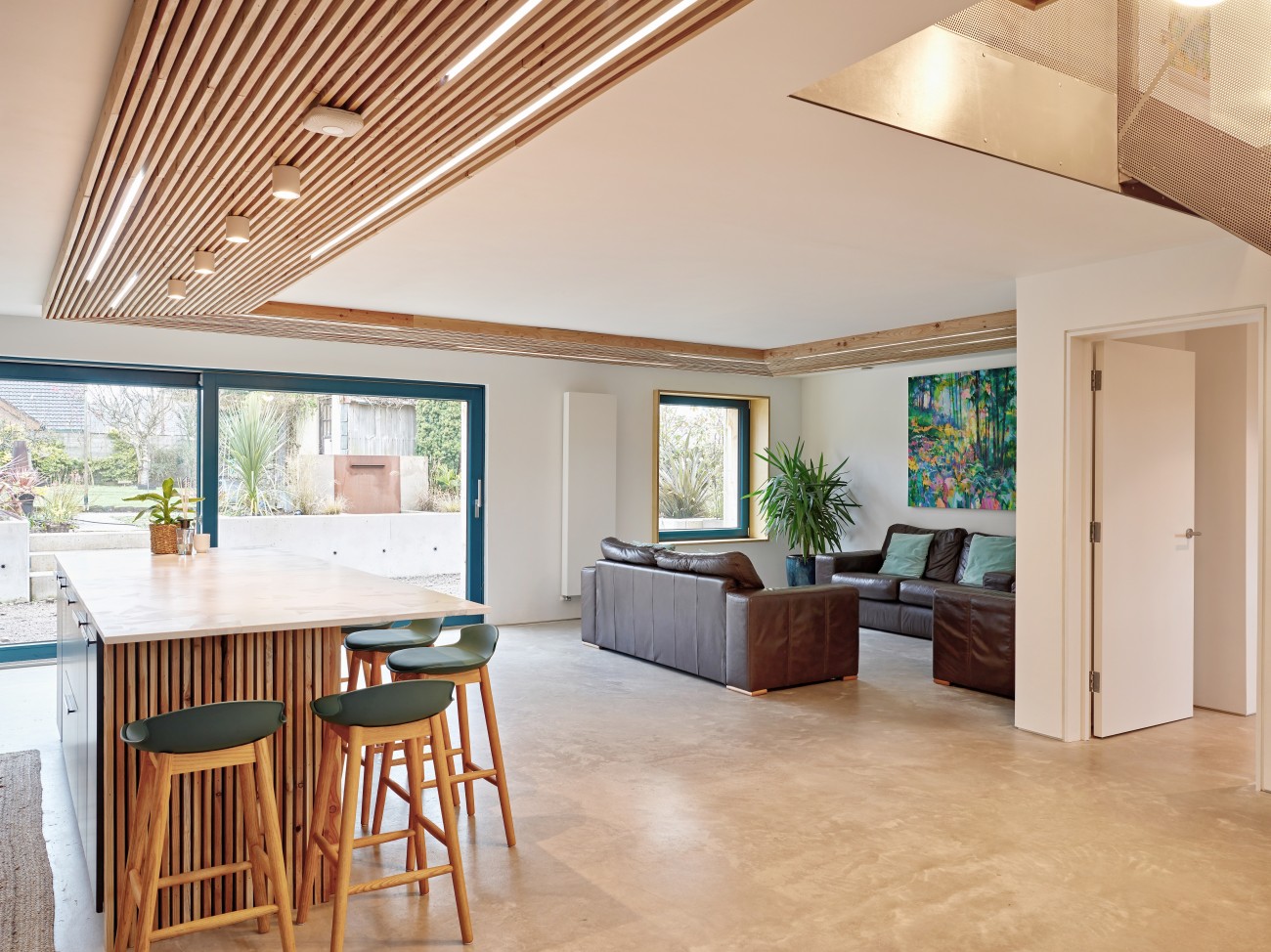 One of the main hubs of the home – the open plan kitchen, dining room and seating area – is modern and meets the requirements of a Passivhaus home. The main feature of this space includes the 4.8m triple-glazed patio doors supplied by Passiframe as approved suppliers of Green Building Store windows and doors. ProClima high performance airtightness tapes and membranes were used for sealing.

The room also accommodates a floor-to-apex open stairwell. The house was built on an IsoQuick insulated raft slab so the couple chose to float the concrete for their floor finish - saving them money and time and the result is a clean, crisp and contemporary finish.

Ian says: “I remember it was a busy day pouring concrete with around eight lorries turning up one after the other. We selected a local company that could offer us this efficient service so that the finish of the concrete wasn’t compromised and also gave the same colour and consistency in every load.”

The utility/pump room is a practical space which features an ex-display kitchen from Jewson with a sink for dirty clothes to avoid cluttering the clean lines of the kitchen/open plan dining space.

This room accommodates the mechanics for the air source heat pump, Mechanical Ventilation Heating Recovery system (MVHR), water tank, heat exchanger and solar thermal. “It was tricky fitting this all in, explains Ian, “and we may have benefitted from making this room slightly wider but it would’ve meant compromising on the open plan living space.” 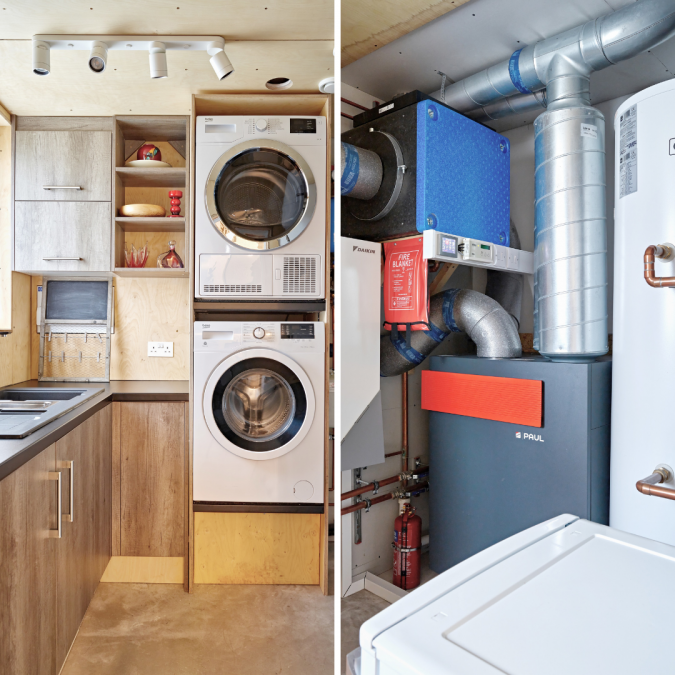 An ultra-modern open staircase, which was designed by Justine’s dad Paul, features perforated steel treads and balustrade. “We wanted to make the most of the vaulted ceiling we have designed and handmade a pendant light that hangs down to the ground floor,” adds Justine.

The stairs lead to a first floor family bathroom – a bright space with two sinks, vaulted ceilings and a large bath. The three bedrooms are identical with the main bedroom featuring a walk-in wardrobe and ensuite.

The rear garden has been landscaped and is slightly sunk into the ground as the couple were not given planning permission to build any higher than the old cottage. 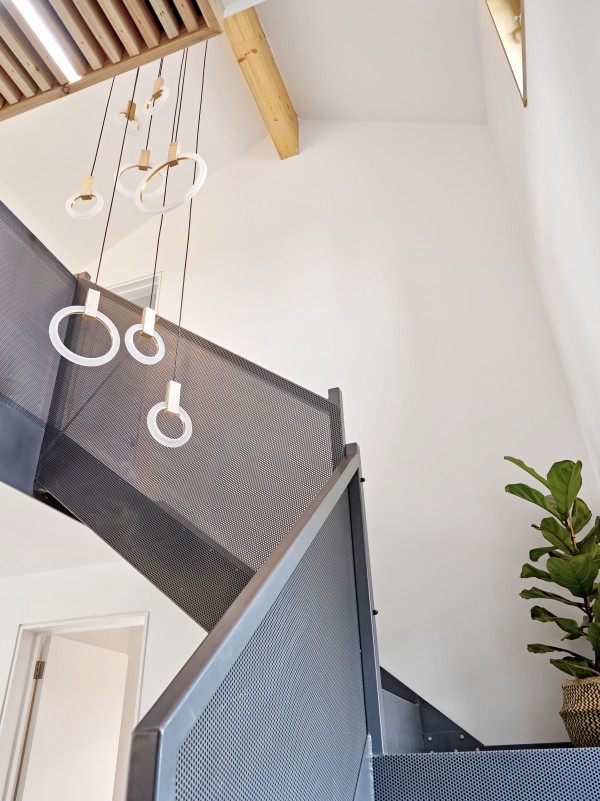 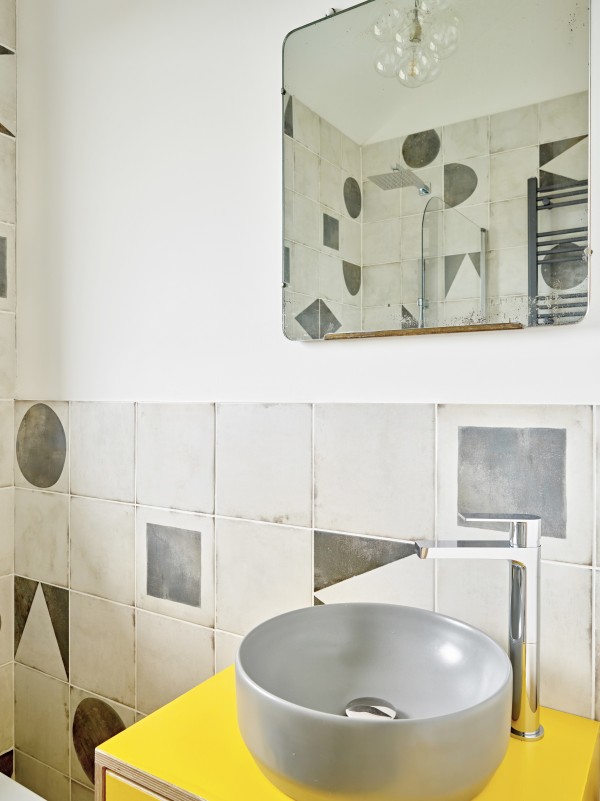 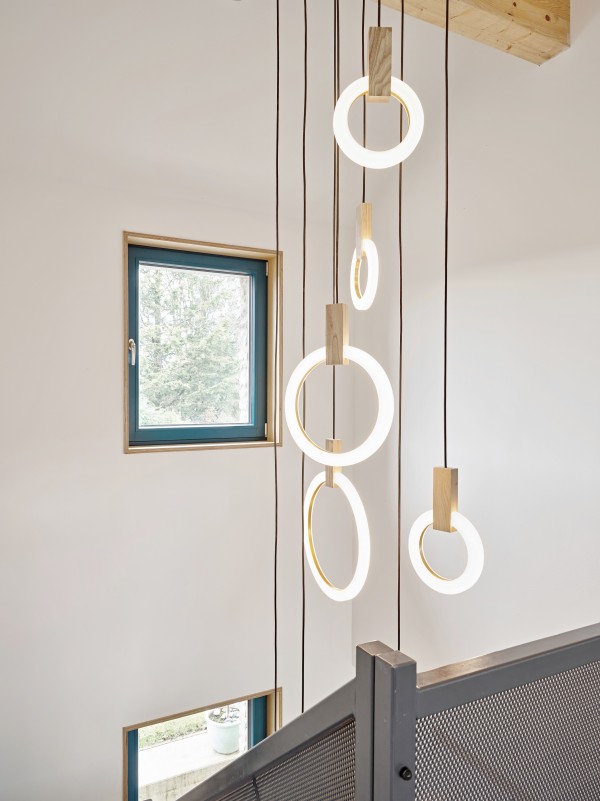 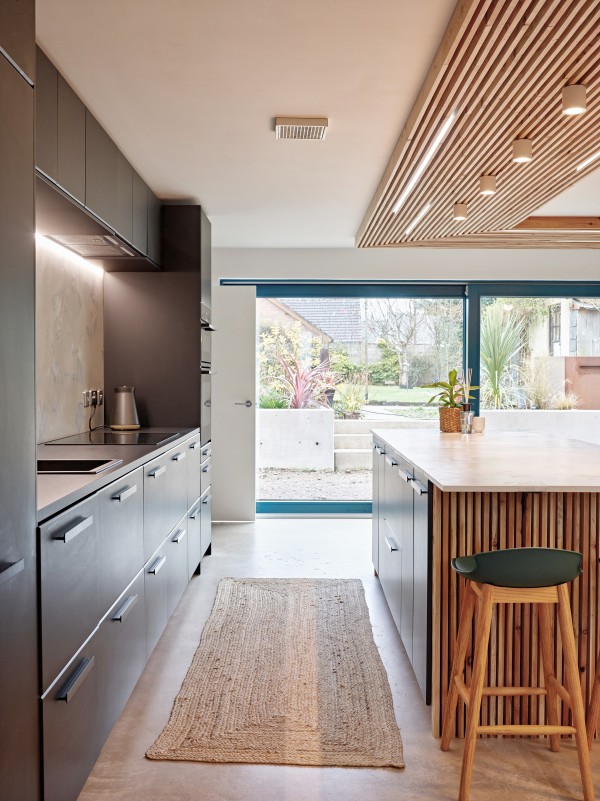 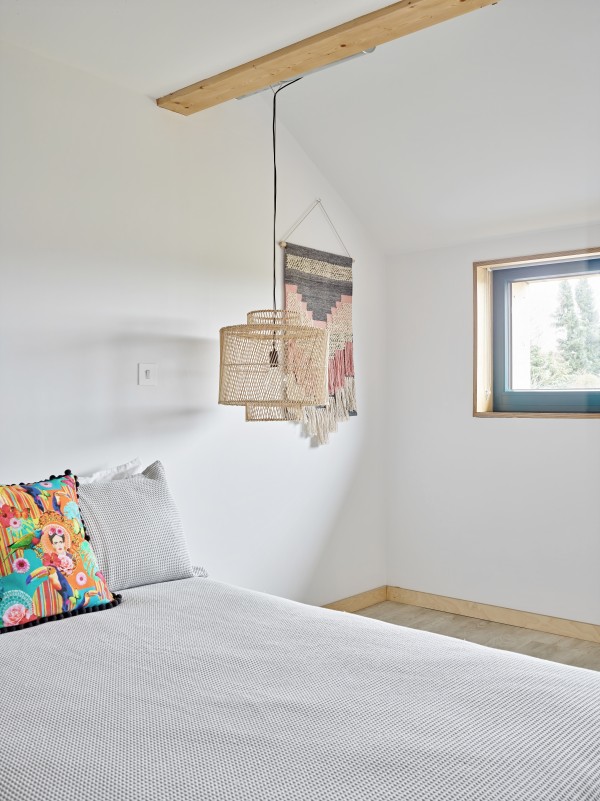 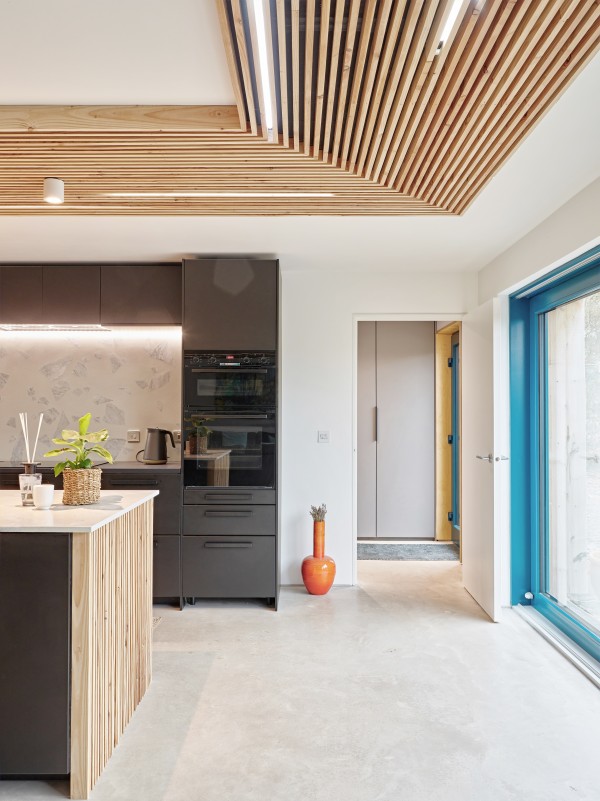 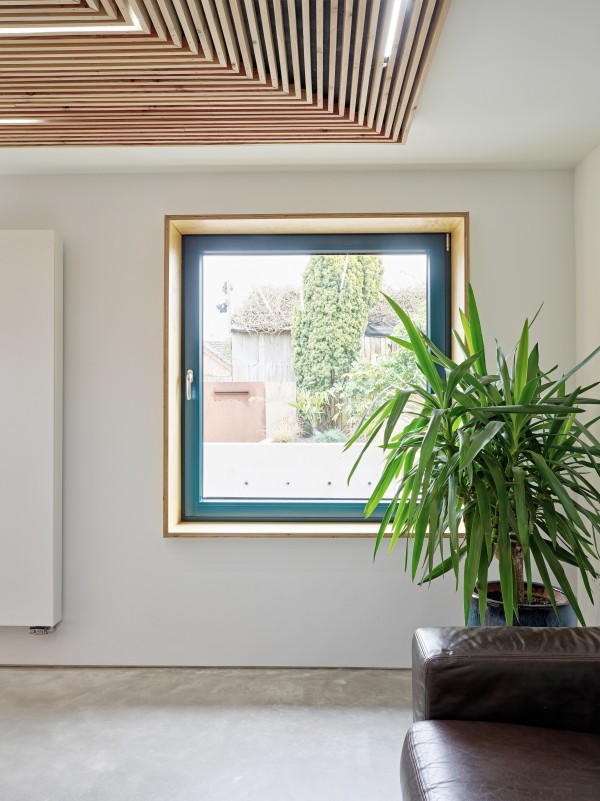 Five years on, the home delivers on every front.

Justine explains: “It’s been hard but we knew it would be worth it. We recently received the airtightness test results 0.21ACH (air changes per hour), which were certified by Passivhaus.

“We are pleased with the results. There hasn’t been the need for heating throughout the freezing winter weather recently and the house is retaining 19-20 degrees throughout. We’ve had the heating on a few times this winter so far but that has mainly been to test it out.

“We’ve learnt that it’s so important to give realistic deadlines and the most stressful part of self-builds is when tight deadlines have been set.

“If we could do this all over again then I think we’d perhaps try and ascertain a larger budget so that things weren’t so constrained.” 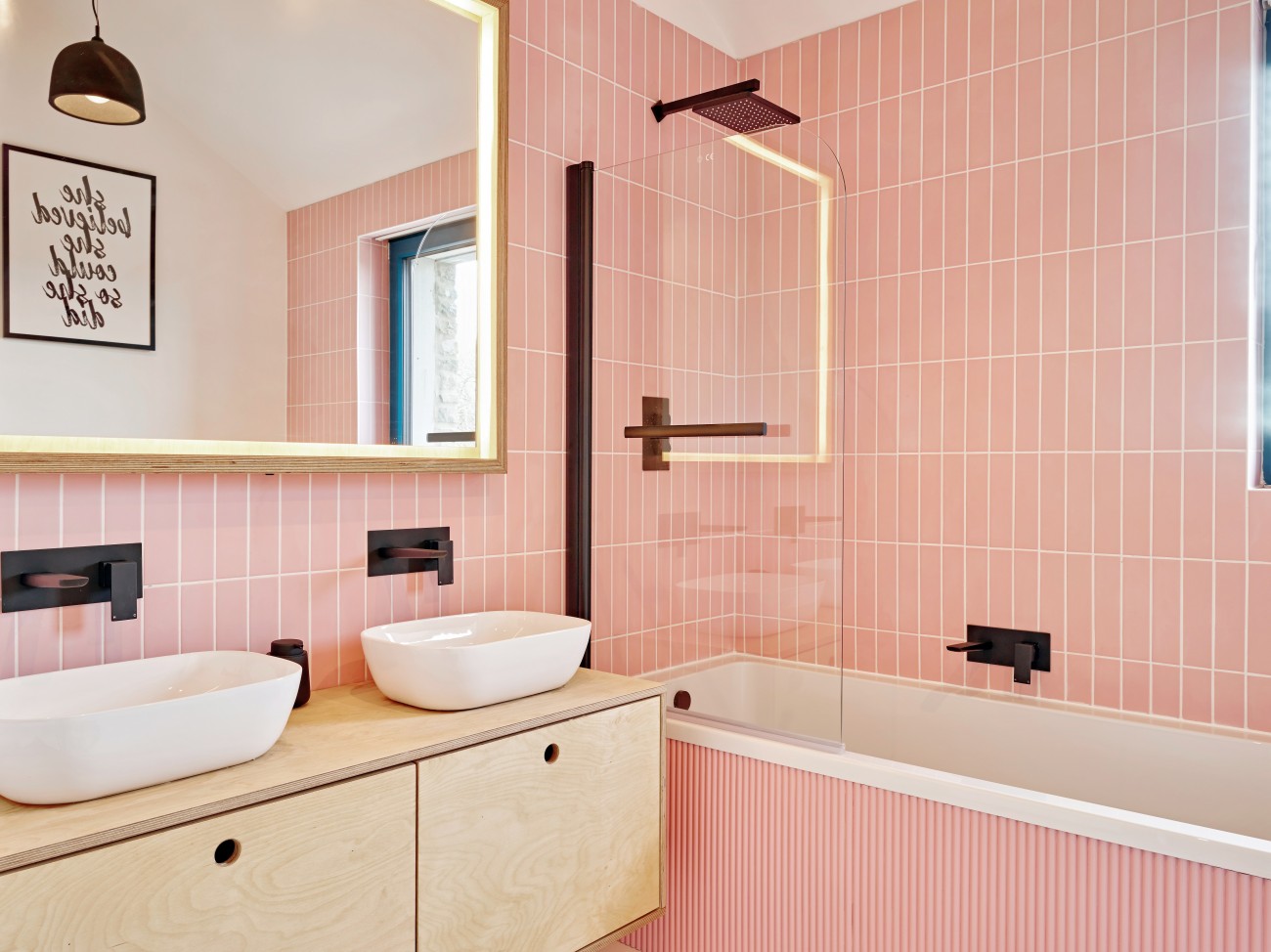 “Working hard for this amount of time takes its toll and I felt guilty for not spending quality time with my family but they all chipped in and have been a true part of the journey to completing this build,” adds Ian.

“Just building this home together as a family has had huge benefits. We have achieved this as a family with support from other family members and friends. Our two small children have learnt valuable building skills, learnt about hard work and determination and the true cost of things.

“It has been a fantastic opportunity to work together as a couple and family to create something to enjoy for years to come.” 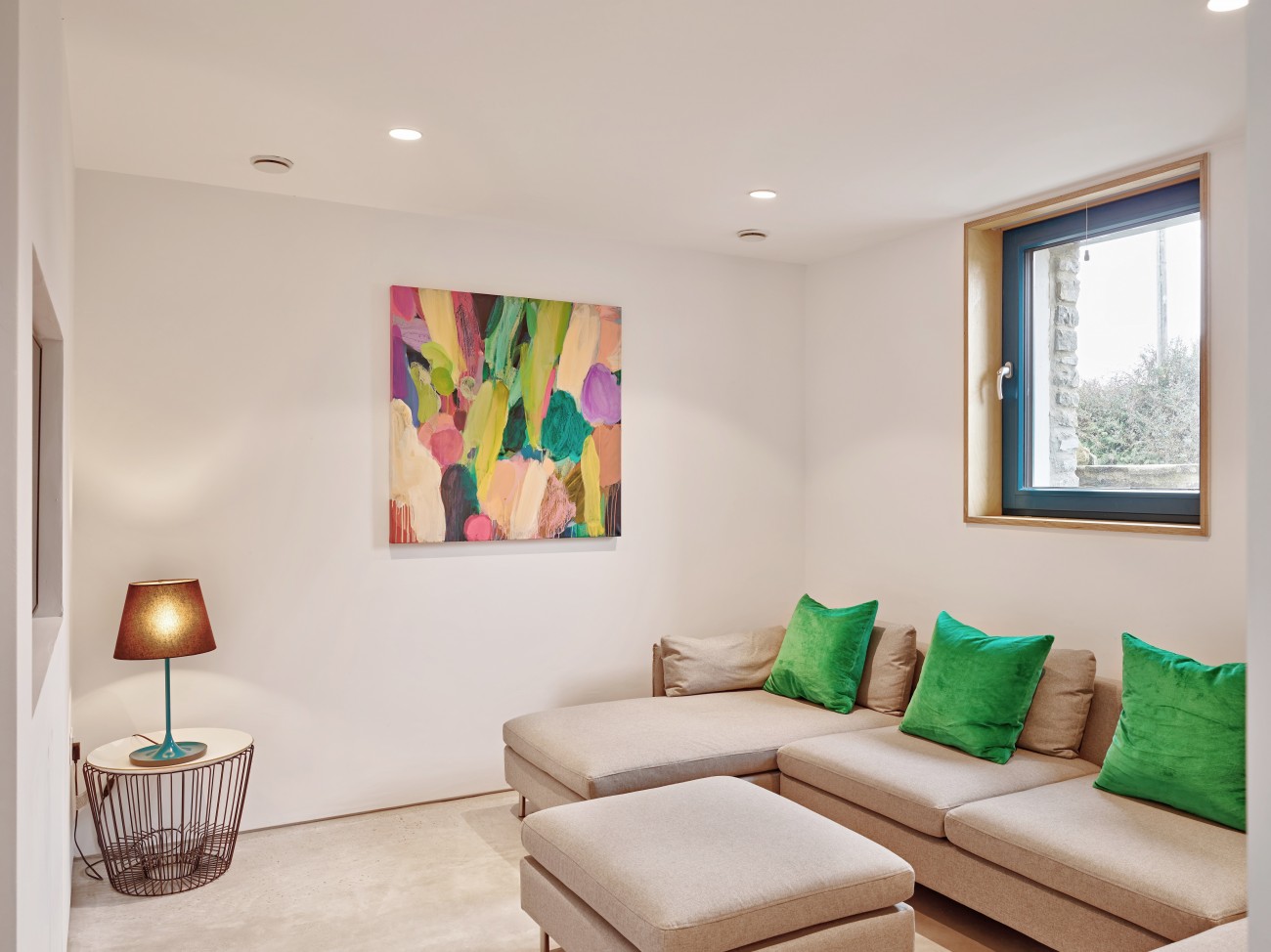 Passivhaus Consultant Scott Adams of Passiframe Ltd ended: “It has been fantastic working on this project with Ian and Justine as a family. To watch the family project grow has been inspirational.

“We had a tight budget to work to but after several discussions we managed to design something that was affordable yet ticked the boxes for their dream home.

“To achieve the airtightness result and level of comfort the family are experiencing now they are in the house has made all the hard work worthwhile. As a company we are excited about the future and designing more homes to the Passivhaus standard in the local area.”

Passivhaus is a building standard for those seeking to construct a low-energy home. It’s all about reducing the heating demand. These are built with attention to detail and rigorous design and construction according to principles developed by the Passivhaus Institute in Germany. How do you achieve the Passivhaus standard in the UK? Well, it’s about very high levels of insulation, high performance windows with insulated frames, airtight building fabric and employing a mechanical ventilation system with highly efficient heat recovery.

Find out more at www.passivhaustrust.org.uk. 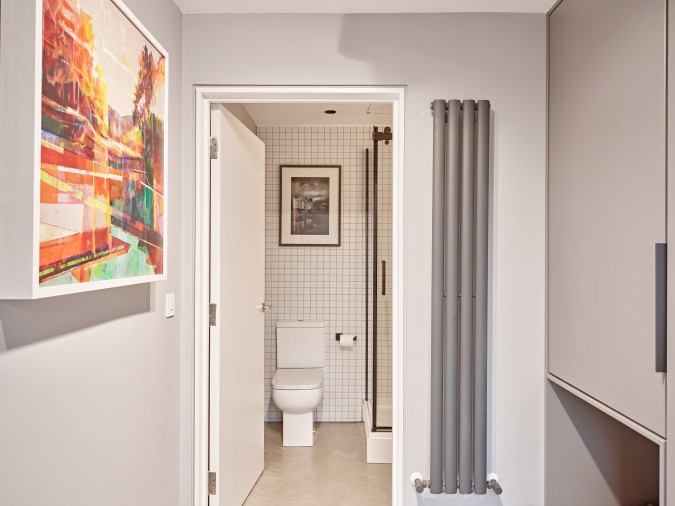 Ian and Justine's advice for self-builders;

Discover more information on designing a sustainable, energy efficient home in our blogs. 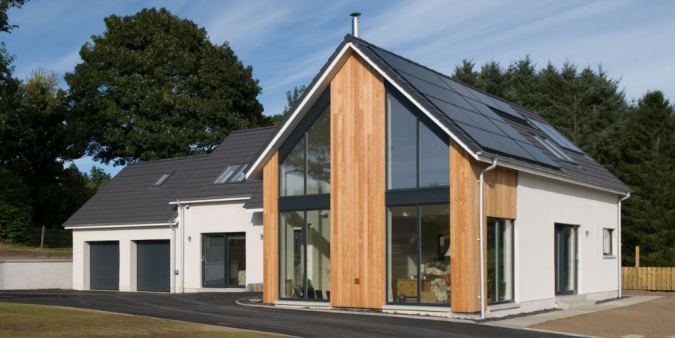