In March 2021 we finally moved into our timber frame construction self-build. We’re weren’t quite ready to pop open the champagne as there was still plenty to do. We had to leave our rental home, which was costing us £800 a month, and due to the global pandemic, our project experienced so many delays.

With wires and extensions leads everywhere, we moved into our self-build without a kitchen or toilet. By the end of the first week it was my priority to get toilets and our washing machine plumbed in, much to my wife Rachael’s delight!

Living in an unfinished self-build is no fun at all and I was even more conscious as there were extension leads trailing across the floor – not ideal when you have kids but they’ve been so positive and have viewed the whole experience as one big adventure! They are used to it by now. After a month of moving in we managed to get the house into a liveable state. We didn’t have any doors – huge delays on those – but at that point it didn’t matter! 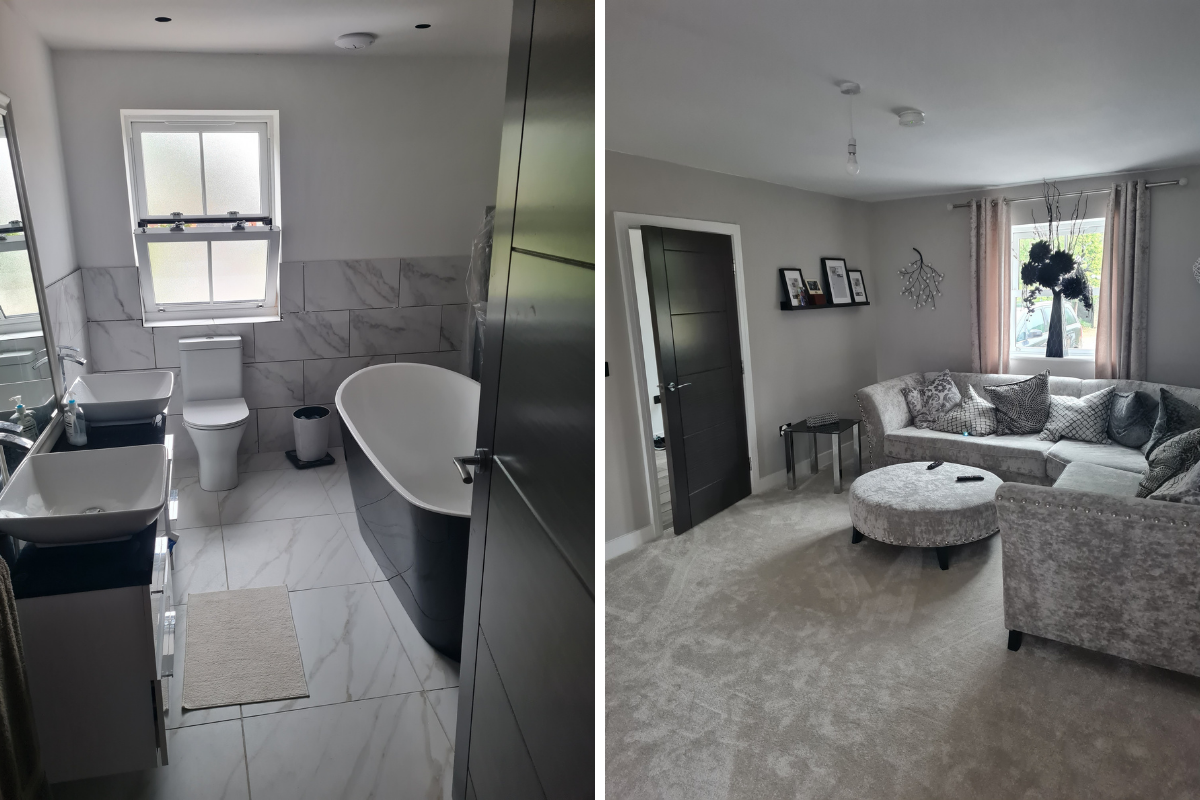 Price wars and stepping it up…on our own

I am incredibly fortunate to have reached this point. Due to the pandemic, material costs have massively increased and I watched as prices rose on a daily basis. In October 2020 I was quoted £34 per insulation sheet and a week later I was quoted £38, that’s an astonishing 18% hike!

One thing I have learned (and continue to) is that a self-build is never short of challenges and blockers. Everything can be going to plan, and on budget, and suddenly you find yourself navigating through delays that you hadn’t anticipated. Our plumber was so hit and miss, he was being called out to other jobs and abandoning work on our self-build. It was driving me mad! I had to be firm with him and luckily I am not shy in coming forward but it’s one thing to bear in mind as a self-builder…you can’t always be nice.

I needed the job done and he was letting me down. The result of his unreliability has meant that it’s cost me a lot of time plumbing the toilets and bath in myself (with the help of a friend). My electrician, a friend of ours, has been a saving grace. He connected the immersion to hot water and thanks to ‘mates’ rates’, I have managed to save more than £4,000 on electrics.

We’ve done as much as we can to save cash with the help of friends. I spent weeks insulating and soundproofing the whole house. I chose to upgrade to 100mm sound insulation in the stud partitions and between floors. British Gypsum Soundbloc plaster board was used on all ceilings and any rooms with adjoining walls. I also used 15mm Gyproc FireLine in the kitchen and garage areas and any steels that need to be covered. Gyproc Wallboard (15mm) was used everywhere else.

I can’t hear anything, people said I went overboard (excuse the pun!). The only downside is that the insulation has pushed the wall back slightly as I used 100mm instead of 98mm, which does make a difference. My quest for a quieter home has paid off, you can already see how well it works. You can’t hear sound and noise from other rooms and that makes a difference especially when you have noisy kids! 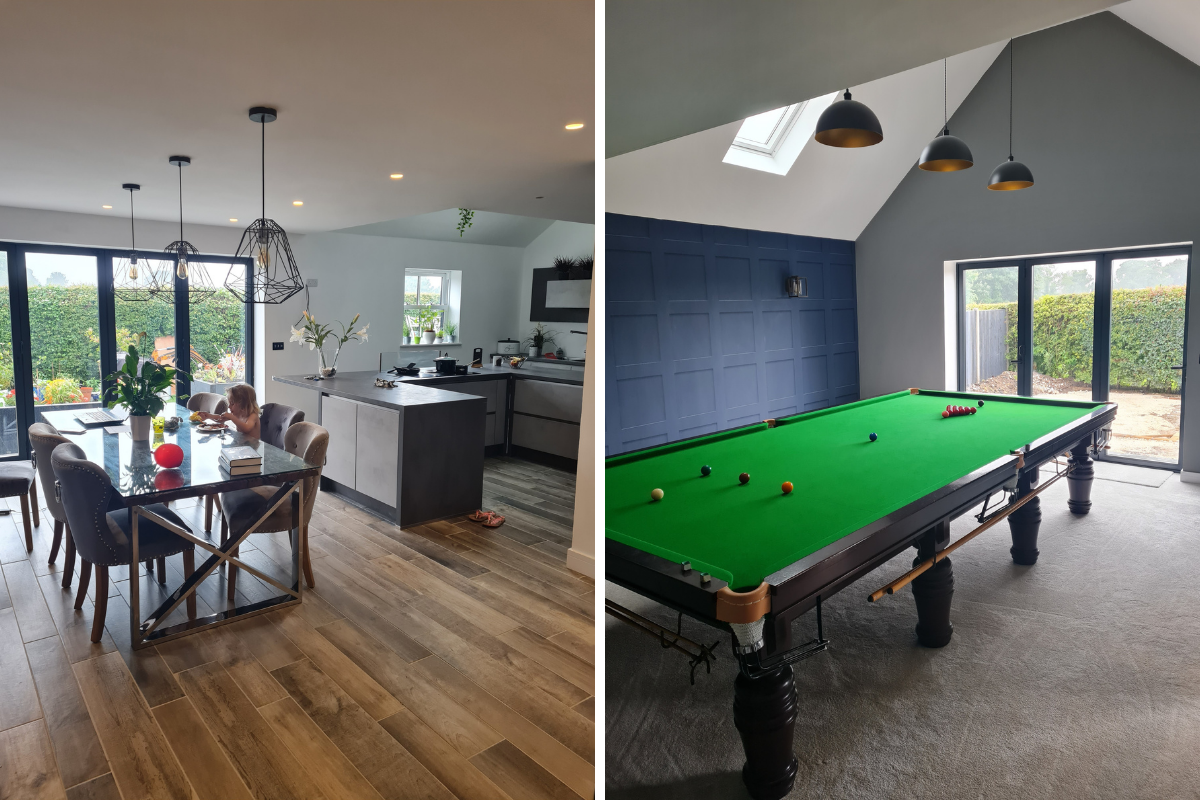 A roof over our head

Elsewhere, I have been busy working on the roof void, which was fitted to a total depth of 250mm using products such as Saint-Gobain Isover Unislab and Celotex insulation: 150mm for the floor area and 25mm for my over boarding in the roof areas This has helped to create an airtight envelope (as required to hit the SAP calculations). Thankfully, I purchased a lot of my materials in late 2020 before all of the material price hikes. Maxine at Jewson in York has been so efficient and helpful in providing our materials including blocks, lintels, patio, ducting, guttering, insulation boards and plasterboard.

Another way to save money is by doing all of the decorating ourselves. Rachael and I have been painting non-stop for months. Who told us vaulted ceilings were a great idea? They look amazing but, wow, they are difficult to paint! We used a bare plaster paint as it is specifically designed to apply directly onto new plaster. Other paints could flake if applied directly to plaster. Ideally we would have spray painted the whole house for £600 but it was impossible to do this as we had already moved in. Definitely something to save our time on our next self-build adventure.

Before the kitchen was fitted I was tiling for a few days until 3am to make sure it was ready before the fitters came in. I had to, with the help of Rachael and some guys from work, lay the floor insulation during some cold months earlier this year. Taking turns to huddle around a heater was a low point but we were able to have a good laugh! Unfortunately, we did also experience a few leaks when the upstairs sink was connected and a shower waste leak – all not ideal but they were resolved.

Back in May I had to have an ankle operation so I was out of action for a few weeks but I was already thinking ahead and setting ourselves deadlines to ensure our self-build project remained on track.

There’s no doubt this self-build project has tested us in so many ways. Enduring so many delays and having to do a lot of the work ourselves was exhausting both mentally and physically. The last jobs involve landscaping the garden but I am waiting on my VAT return of around £23,000 before we start work. We have a professional landscaper in to help set the levels and a friend of mine is going to lay the flags and we can do the rest ourselves. We’ve chosen promenade grey flagstone from Jewson.

It’s been worth the stress and long days. So many people have said how amazing the house looks and in other good news…my snooker table is in place!

The house has been valued at £675,00- £700,000 and we’re planning on selling it next year, all depending on the state of the housing market. In my mind I set out to do three self-builds and eventually become mortgage-free. The self-build adventures continue…

The aftermath: James’s self-build might be finished but how does he cope with the admin/tax returns, air testing and will he finally complete landscaping before Christmas? 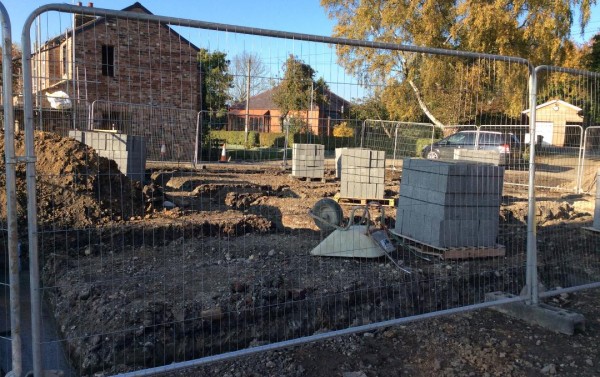 Confessions of a Self-Builder: Part 1

Go back to the beginning 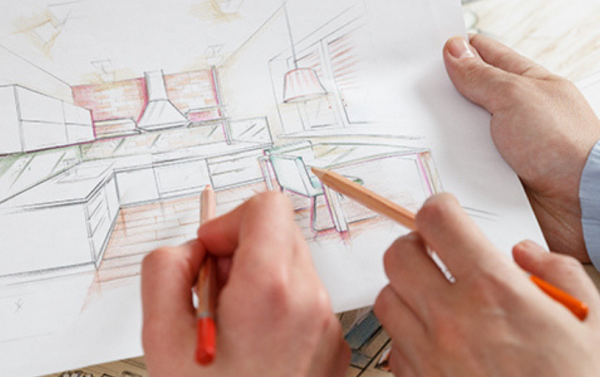 The options for project managing your build